Author: Kate Quinn
Sourced: DC public library, but on Amazon for under $10
Meows: 4.82 out of 5, a minor deduction for length and book design

A dual story told chapter by chapter of two women battling the same enemy, post World War II. Eve Gardiner and Charlie St. Clair are an unlikely duo, but when Charlie sets out to look for her lost cousin, she teams up with Eve to find the truth about what may have happened. Simultaneously, we are invited to hear the story of Eve, a female operative in The Alice Network who helped spy on the Germans during the first World War. Quickly, Eve and Charlie’s story intertwine as they hunt for a man named Rene to ultimately discover the truth that Eve has been denied for 30 years. Throw in a love story with a burly Scotsman, and you’ve got The Alice Network.

“There is no time for fear, she told herself. It is an indulgence.”
page 134

“Most women are bored, because being female is boring. We only get married because it’s something to do, and then we have children and find out babies are the only thing more boring than other women.”
page 151

“What did it matter if something scared you, when it simply had to be done?”
page 204

“What’s the use of worrying?” Lili wrinkled her nose…And nothing happened, nothing at all. Worry is wasted time, little daisy.”
page 298

“There are two kinds of flowers when it comes to women,” Eve said. “The kind that sit safe in a beautiful vase, or the kind that survive in any conditions…even in evil. Lili was the latter. Which are you?”
page 336

First of all, this was a long book. I know that sounds silly to say, but I felt so invested in needing to know what happened next that I found myself skipping passages to get to the next part and then having to go back and re-read what I missed. I couldn’t make my eyes and my brain move fast enough. Not to mention that I had such a hard time with the design of the book and the pages. Perhaps a minor detail in the grand scheme, but it was annoying to not easily flip to the next page as my eyes raced from line to line. With that in mind, this is still an all around good read and worth 500 pages—more or less because I really don’t know which part the author could have cut.

But yes—toe beans. I’d give it a solid 7 out of 10. Perhaps a keeper for my personal collection (if not borrowed from the library), but The Alice Network is one of those books you’d easily pass on to a friend for a quick read and not be heartbroken if you didn’t get it back. That’s not to diminish the book in any way, but I just can’t say with certainty that I’d reread it again any time soon. Yes, the length but also, I find myself wanting to read some of Quinn’s suggested reading on the historical subject of female spies and the real Alice Network of World War I.

For me, the best part of Quinn’s novel was the Author’s Note where we learn how much of her fictitious novel is in fact non-fiction. I thought for a moment that much of the book was loosely based on a single concept, but Quinn’s book includes many historically accurate pieces of information—making the read even more compelling. I almost wish the note had been provided as a forward to better set the scene. Regardless, I find myself curious to learn more and I certainly consider myself intrigued. 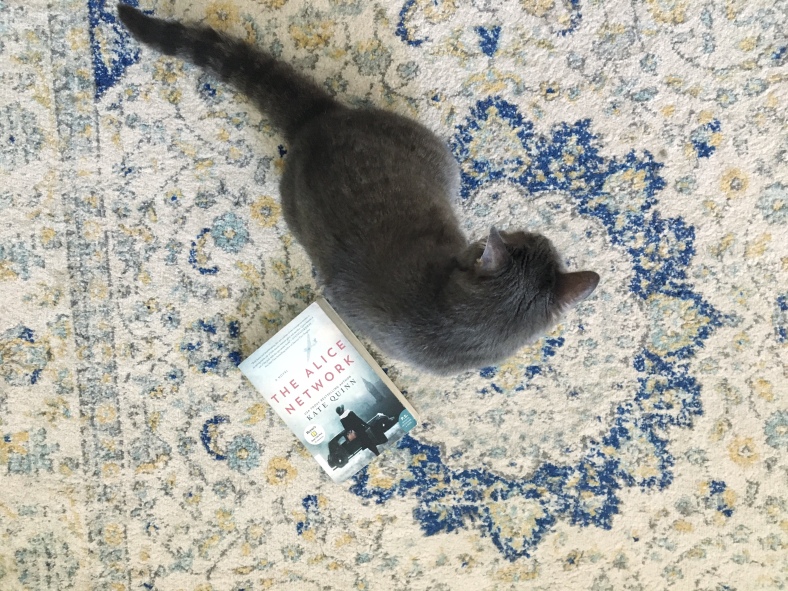 Anyone else reading historical fiction and loving it? Pass on book title for Anaconda and I to read.